They go bump in the night

Someone’s up to no good? Must be They. 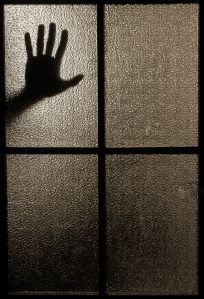 Damn you They! Pick on someone your own age!

House spirits come in many forms. Sometimes they’re just a nuisance, like the sock monster. Other times they’re playful, like I Dunno and Not Me in the Family Circus comic. Occasionally they’re sinister, like the ones on ghost hunter shows who throw rocks and chant the names of those they murdered.

The spirit living in our house is exceptionally evil, because it only torments one person — Grandma. It goes by the name of They.

They takes Grandma’s pens. It steals her cookies. It even makes her bathe! And just this week, They mysteriously cut the August and September pages off Grandma’s beloved kitten calendar. It’s the only thing she asks for every Christmas, so why on Earth would she deface it? It had to be They.

Grandma thinks I’m in cahoots with They. Why else would she says things to me like “I sure wish They would bring my flashlight back.”  Actually, I think she believes I am They — she just doesn’t want to flat out accuse me of stealing her things and damaging her prized possessions.

Up til now I’ve chalked up They’s shenanigans to good old fashioned forgetfulness on Grandma’s part. But the latest incident has me puzzled too. Did I sleepwalk down there and  delete 1/6 of that old woman’s year? I’ve heard of people doing weird things when they take prescription Ambien, but I’ve never woken up with scissors in my hand. And besides, I’m out right now anyway. So for the time being I’m pretty sure I’m not They.

I’m on alert for They’s next prank. There’s no stove to leave on downstairs so I don’t think it can cause serious trouble, but there are two phones, and I’m guessing They can dial 911 if there’s an emergency — like no bananas or the TV won’t shut off. You don’t think that could happen? Well obviously you’ve never lived with They.